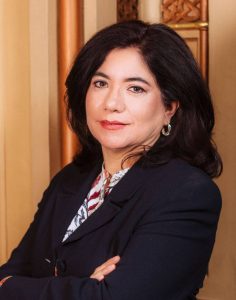 Doctor Claudia Escobar is a former magistrate of the Court of Appeals of Guatemala. She is recognized internationally as a corruption fighter and has dedicated her life to working for the respect of law and the defense of judicial independence. On June 2017, she received the “Democracy Award” for her commitment to fighting impunity and corruption. Recently, she was honored by the Harvard Women's Law Association and Harvard Law in exhibition “Women inspiring change” organized on the School's 6th Annual International Women's Day Celebration.

Escobar obtained her Ph.D. at the Universidad Autónoma de Barcelona and her law degree at the Universidad Francisco Marroquín in Guatemala. She is now affiliated with Georgetown, where she was elected as a Centennial Fellow in the Walsh School of Foreign Service. Also, she was a fellow at Harvard University, becoming the first Central American to be awarded a fellowship (2015 – 2016) at the Radcliffe Institute for Advanced Study. Judge Escobar is one of the commissioners of the International Anticorruption Commission in Ecuador.