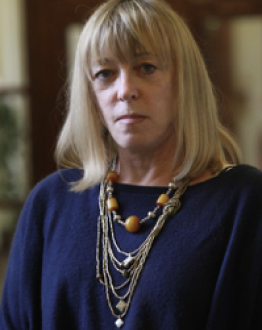 Jody Williams is an American political activist who received the Nobel Peace Prize in 1997. She and the organization she helped found in 1992, the International Campaign to Ban Landmines, shared the prize for their groundbreaking work leading to the Mine Ban Treaty that year. An outspoken peace activist since the Vietnam War, she struggles to reclaim the real meaning of peace, which is defined by human security, not national security.  For her, working for peace requires dogged persistence and a commitment to sustainable peace, with socio-economic justice and equality. Since January of 2006, Jody Williams has worked toward those ends through the Nobel Women’s Initiative, which she chairs.  Mairead Maguire (Northern Ireland), Rigoberta Menchú Tum (Guatemala), Shirin Ebadi (Iran), Leymah Gbowee (Liberia) and Tawakkol Karman (Yemen) are the other members of the Initiative.  Using the prestige of the Nobel Peace Prize and the influence and access of the women Nobel Laureates, the Nobel Women’s Initiative works to support and amplify the efforts of women around the world working for sustainable peace with justice and equality. Williams is the Sam & Cele Keeper Endowed Professor of Peace and Social Justice in the Graduate College of Social Work at the University of Houston, where she has taught since 2003.