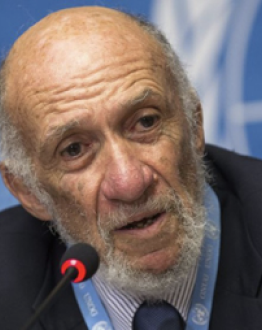 Richard Falk is Chair of Global Law, Queen Mary University London, Faculty of Law. He received his undergraduate degree in economics from the Wharton School at the University of Pennsylvania, a law degree from Yale Law School, and a Doctor of Juridical Science (SJD) from Harvard Law School. After teaching international law and criminal law at the Ohio State University College of Law he was appointed a professor of international law at Princeton University and for several decades was the Albert G. Milbank Professor of International Law and Practice. During his long career in academia, he also taught at Stanford University, the University of Stockholm, and as a Visiting Distinguished Professor at UC Santa Barbara. He is the author or co-author of more than 20 books, and the editor or co-editor of numerous others. Not only has he influenced the views of a generation of scholars in his role as teacher and thinker but during forty years at Princeton University Professor Falk was also active in seeking an end to wars, the strengthening and upholding of fundamental human rights, the promotion of respect for international law, and improved democracy in numerous countries in the world. Over the past decade he has been nominated many times for the Nobel Peace Prize, in recognition of his ability to bridge the gap between his work as a brilliant scholar with his desire to see peace and security to be tangible realities on the ground. His most recent book (2021) is a political memoir, Public Intellectual: The Life of a Citizen Pilgrim was published by Clarity Press.