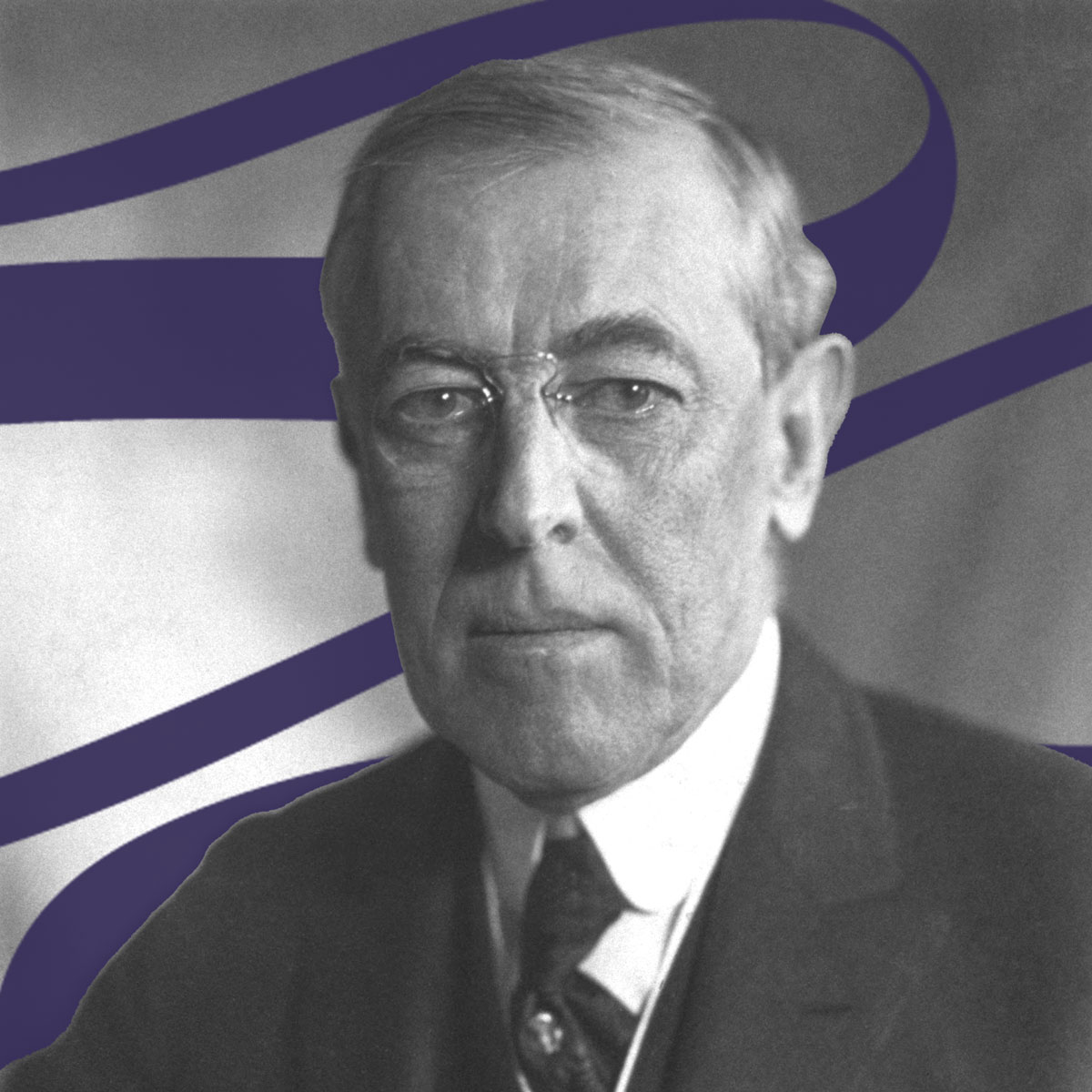 Before becoming President in 1913, Wilson had served as president of Princeton University and as governor of the state of New Jersey. As President, he oversaw the passage of progressive legislative policies unparalleled until President Roosevelt’s New Deal in 1933, including establishment of the Federal Reserve and significant antitrust legislation. He also led the United States into World War I in 1917, establishing an activist foreign policy known as “Wilsonianism” characterized by liberal internationalism.

Like many individuals around the globe, Woodrow Wilson was shocked by the outbreak of a devastating world war among European empires in 1914. As President of the United States, however, he had a unique opportunity to shape the outcome of this catastrophic conflict. He was a leading advocate for a new approach to international relations and the problem of war in which the first global political organization, the League of Nations, was to be the key mechanism for ensuring a peaceful and orderly world.

The announcement by Germany of unrestricted submarine warfare and the subsequent sinking of ships with Americans on board propelled the United States’ late entry into World War I in April 1917. But President Wilson’s war aims went beyond the defense of maritime interests. In his War Message to Congress, Wilson declared that the United States’ objective was “to vindicate the principles of peace and justice in the life of the world.” In several speeches earlier in the year, Wilson sketched out his vision of an end to the war that would bring a “just and secure peace,” not merely “a new balance of power,” but a peace that would “serve the several interests and immediate aims of the nations engaged.”

President Wilson viewed World War I as the folly of failed diplomacy, aimed only at balancing the power and imperial interests of the great European states and alliances against each other. Unable to avoid American entry into the war in April 1917, Wilson committed himself to creating a new international order with a League of Nations at its center to peacefully manage conflicts between states and put an end to senseless warfare. The League of Nations was not his vision alone, as similar ideas about a society of nations to facilitate or even enforce the peace had been discussed by others before him. Nevertheless, Wilson’s “Fourteen Points” became a driving force to establish the League as the guarantor of the post-war peace.

A key role in creating conditions favorable to the League of Nations was played by a contemporary NGO called the League to Enforce Peace (LEP), which responded to the ordinary citizen’s horror at the savagery of the Great War, in which over a million British, French and German soldiers had perished in one four-month period alone. The LEP made four modest proposals: first, that non-political questions of international law should be submitted to a judicial tribunal; second, that members of the League should use military force to prevent any one of their number from going to war before submitting the question to the tribunal; third, that political questions should be submitted to a council of conciliation before members took up arms and went to war; and fourth, that efforts be made through international conferences to codify international law. Thus, it was envisioned that the League of Nations would force countries to go through a process of negotiation and peaceful conflict resolution before implementing deciding to take up arms.

In an effort to overcome the longstanding American aversion to “foreign entanglements,” President Wilson move cautiously, so as not to awaken similar sentiments among the US political establishment. In a 1918 speech he was careful to explain the difference between “special and limited alliances” which create such entanglements and the need for “general alliances” which form the basis for a “common understandings and the maintenance of common rights.”

The final drafting of the articles of the League Covenant took place in Paris, by a group of nineteen multinational commissioners, including President Wilson and his “silent partner” and confidant, Edward House. Article 5 effectively gave each member country veto power over decisions of the Council, considerably weakening the League from its inception. Article 8 required that members of the League reduce armaments to the lowest point consistent with national safety and enforcement by international obligation and called for arms reductions to be reviewed at least every 10 years. Article 10—the most important in Wilson’s view—enjoined members of the League to respect the territorial integrity and existing political independence of each members, an early attempt at a system of collective security.

Articles 12, 13 and 15 provided for peaceful settlement of disputes and arbitration and conciliation, reflecting Wilson’s belief in the significance of consultation and arbitration in preventing war by providing a forum for airing grievances and exploring ways to resolve them peacefully. At a speech in the University of Paris on December 21, 1918 Wilson said:

My conception of the league of nations is just this, that it shall operate as the organized moral force of men throughout the world, and that whenever or wherever wrong and aggression are planned or contemplated, this searching light of conscience will be turned upon them and men everywhere will ask, ‘What are the purposes that you hold in your heart against the fortunes of the world?’ Just a little exposure will settle questions.

However, Article 15 stated that if conciliation efforts failed, states reserved the “right to take such action as they shall consider necessary for the maintenance of right and justice,” in other words, the right to go to war to defend national interests. Thus, the League failed to eliminate war as an instrument of national policy.

Strenuous opposition to the League came from within the US Senate, where some feared that Article 10 would render the United States the world’s policeman, and thus damage the “soul of democracy.” Then chair of the Committee on Foreign Relations, Henry Cabot Lodge, proposed 14 substantive reservations, intended to strengthen US power within the League or introduce conditions exempting it from many of its obligations. President Wilson was unwilling to accept conditions which he felt would weaken the League.

Regrettably, the drafting and ratification of the Covenant descended into a partisan battle within the US, worsened by the massive stroke which President Wilson suffered in October of 1919. Weakened physically, he was unable to take the leadership role that might have ensured victory on the Senate floor. On 19 March 1920, and despite considerable support and enthusiasm in Europe, the Covenant was voted down by a margin of 7 votes.

Indeed, it would take yet another global conflagration, countless deaths, destruction and economic collapse before the European members of the League saw fit to create the European Union, as a more effective antidote to centuries of misguided nationalism, what Einstein called mankind’s primary “infantile disease.”

What many see as the failure of the League of Nations can be attributed to weak enforcement mechanisms, which made it ineffective in restraining its signatories, if they were unhappy with League resolutions, from withdrawing. However, the League was the first international organization that was truly global in scope, representing a hopeful vision for a viable and peaceful global community, and was an important predecessor to the United Nations and current internationally shared ideas of collective security and limits on war.