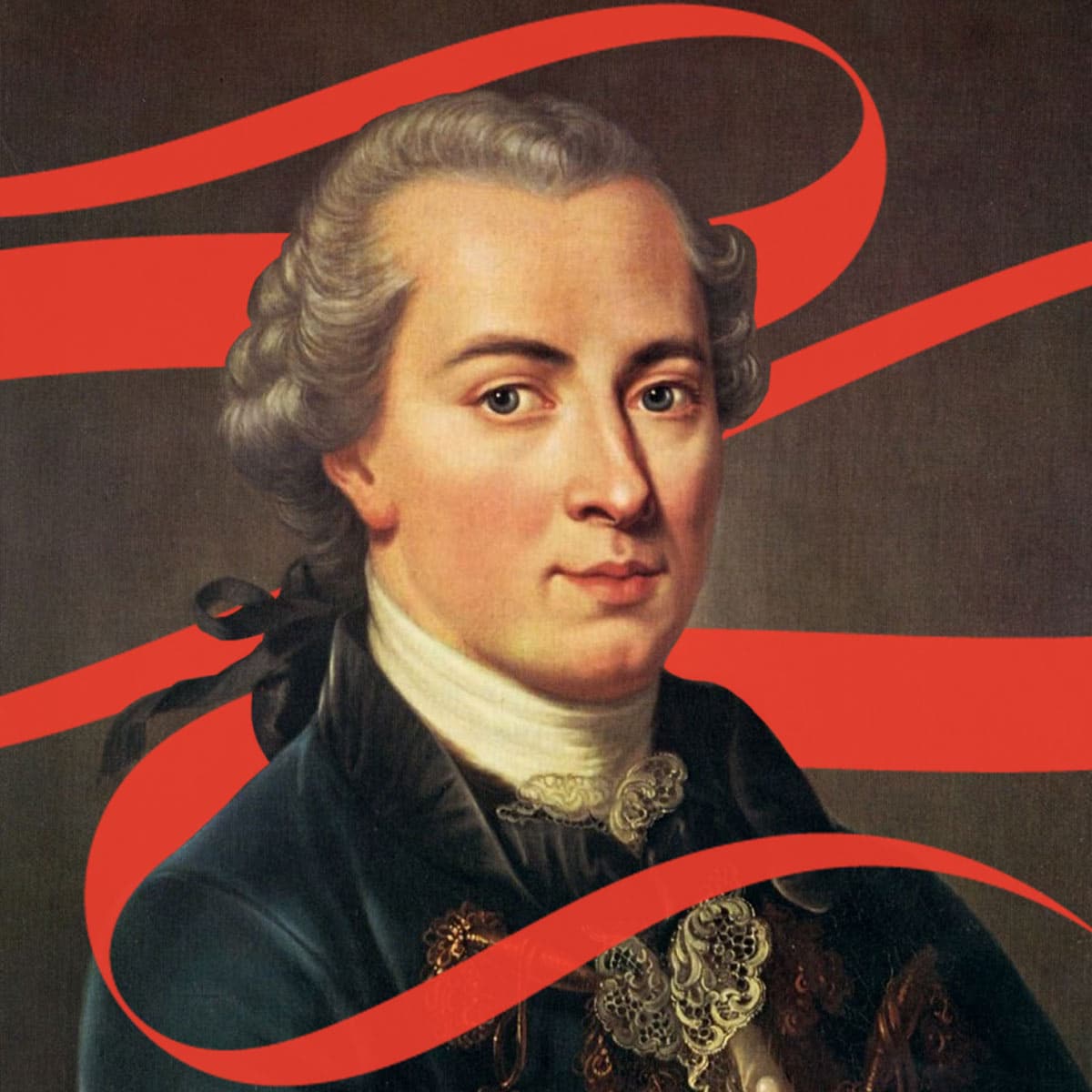 Immanuel Kant (1724-1804), the renowned 17th century philosopher, was the author of a philosophical doctrine, known as “transcendental idealism,” laid out in his most famous treatise, A Critique of Pure Reason. He argued that space, time, and causation are mere sensibilities, that things in themselves exist, but that their nature is unknowable and that intuition is independent from objective reality.

Kant, the son of a German harness maker from Kaliningrad, was one of nine children, only four of whom reached adulthood. He showed great aptitude for study at an early age, graduated from his first school at 16, and enrolled at the University of Königsberg, where he spent his entire career. Typical of the period, his early education was strict and punitive, focused on Latin and religious instruction over mathematics and science. In 1745, at only 21, while working as a tutor for the children in the neighbourhood of Konigsberg, he began writing his first philosophical work, Thoughts on the True Estimation of Living Forces. When he was introduced to the philosophy of Leibniz and the mathematical physics of Isaac Newton, he began a lifelong struggle to reconcile his Christian faith with his belief in science.

In one of his later works, Groundwork of the Metaphysic of Morals, however, he reveals a belief in immortality as the necessary condition of humanity’s approach to the highest morality possible. As Kant was skeptical about the arguments used in defence of theism, he maintained that human understanding is limited and can never attain knowledge about God or the soul, leading various commentators to label him a philosophical agnostic. In his major work, the Critique of Pure Reason, written in 1781, he attempted to explain the relationship between reason and human experience and to move beyond the failures of traditional philosophy and metaphysics, putting an end to an era of futile and speculative theories of human experience. Thus, he is widely held to have synthesized the traditions of both rationalism and skepticism in his thought.

Apart from his preoccupations with pure philosophy and science, Kant’s work shows that even in the eighteenth century, debates about world government were alive and well. He was convinced that the problem of international order, would be “the most difficult and the last to be solved by the human race.” In his 1784 essay, entitled “Idea for a Universal History with a Cosmopolitan Purpose” he expressed his conviction that perpetual peace could be secured through universal democracy and international cooperation. In this work, Kant tried to refute the claim that the development of the domestic state constituted a moral step backwards for humankind, by placing it and its trials “in the history of the entire species, as a steadily advancing but slow development of man’s original [rational] capacities.”

Kant saw war as a means by which nature moves states

to take the step which reason could have suggested to them even without so many sad experiences—that of abandoning a lawless state of savagery and entering a federation of peoples in which every state, even the smallest, could expect to derive its security and rights not from its own power or its own legal judgment, but solely from a great federation, that is, from a united power and the law-governed decisions of a united will.

Kant observed that men formed states to constrain their passions, but that each state sought to preserve its absolute freedom, even at the cost of “a lawless state of savagery.” But the “devastations, upheaval and even complete inner exhaustion of their powers” arising from interstate clashes would in time oblige men to contemplate an alternative. Humanity faced either the peace of “the vast graveyard of the human race” or “peace by reasoned design.” He saw this as the “inevitable outcome” of human history, a point he reiterated in his 1795 essay Perpetual Peace: A Philosophical Sketch, in which he argues the need for a concept of “world citizenship” and insists that reason dictated the formation of “an international state (civitas gentium), which would necessarily continue to grow until it embraced all the peoples of the earth.”

Kant proposed for this “peace by reasoned design” a voluntary federation of nations within a framework of respect for agreed rules of conduct, one in which citizens would no longer wish to face the rigors and consequences of armed conflicts. Kant’s “league of peace” would evolve into a peaceful world order and “a perfect civil union of mankind.” Kant included the concept of “world citizenship,” as a necessary step in establishing world peace.

Kant noted, however, that in current conditions, “the positive idea of a world republic cannot be realized.” Thus, his treatise on perpetual peace begins with the social fact of a world of distinct but interacting states. What would be required, given such a world, to achieve perpetual peace? Kant makes three arguments: First, every state must have a republican constitution that guarantees the freedom and equality of citizens through the rule of law and representative political institutions. The internally well-ordered republican state is less likely to engage in wars without good reason, he wrote, for “under a constitution where the subject is not a citizen, and which is therefore not republican, it is the simplest thing in the world to go to war.”

Second, such internally well-ordered states would need to enter into a “federation of peoples,” distinct from an “international state.” A “pacific federation (foedus pacificum) … does not aim to acquire any power like that of a state, but merely to preserve and secure the freedom of each state in itself, along with that of the other confederated states.” In this context, a federal union of free and independent states, he argued, “is still to be preferred to an amalgamation of the separate nations under a single power which has overruled the rest and created a universal monarchy.” His reasons against a universal monarchy express fears of an all-powerful and powerless world government: “For the laws progressively lose their impact as the government increases its range, and a soulless despotism, after crushing the germs of goodness, will finally lapse into anarchy.” Most forcefully articulating the tyranny objection, Kant argued that a “universal despotism” would end in “the graveyard of freedom.”

The third condition for perpetual peace in a world of distinct but interacting states is the observance of cosmopolitan right, which Kant limits to universal hospitality. Although the human race shares in common a right to the earth’s surface, Kant argued that strangers do not have entitlements to settle on foreign territory without the agreement of its inhabitants. Thus, cosmopolitan right justifies visiting a foreign land, but not conquering it, which Kant criticized the commercial states of his day to have done in “America, the negro countries, the Spice Islands, the Cape” and East India.